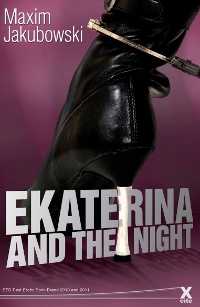 
Please help me welcome author Maxim Jakubowski, author of the erotica book Ekaterina And The Night to A Buckeye Girl Reads.


Courtesy of Xcite Books, three lucky winners can get their hands on a copy of Ekaterina and the Night in their choice of paperback or digital format. (International entries welcome)
Simply leave a comment on this post to win. Be sure to check out the rest of the posts in the tour, because the more comments you make, the more chance you have of winning! Go here to see the blog tour schedule. PLEASE leave your email address in the body of the comment. Winners will be drawn and contacted on the week ending 11th November 2011.  *Colettes note: Please note that the winners are for the entire tour and winners may not be from my stop.*

Ekaterina and the Night buy links: