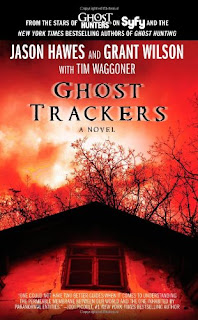 In this spine-tingling new series, the stars of TV’s GHOST HUNTERS introduce readers to a team of paranormal investigators who reunite to defeat a sinister force they unleashed long ago. . . .
For fifteen years, Amber, Drew, and Trevor have barely been able to recall—let alone explain—what happened the terrifying night they decided to explore the old, abandoned Lowry House. According to local legend, the house was cursed by a dark past and inhabited by evil. It burst into flames on the night of their visit, leaving the friends traumatized and nearly dead with only vague memories of the frightening events they had witnessed inside. Now, on the eve of their high school reunion, they have gathered to reopen their investigation and figure out, once and for all, what took place that fateful night . . . before the supernatural entity they escaped threatens to overtake them again. (goodreads)

When I was offered this book for review I did a little fan girl squee because one of my favorite reality shows is Ghost Hunters starring Jason Hawes and Grant Wilson two of the authors of this book. I wasn't sure what to expect by it, especially as I don't read a lot of books in this genre. I was pleasantly surprised at how into the story I got.  Even though it was a tad predictable, I liked seeing the twists and turns the story took to get to the ending.

What I truly enjoyed about this book was you never knew what weird thing would happen next. Would it be the death of another classmate-two die at the reunion of mysterious causes or would it be another flashback to the history of the Lowery House? What was making Amber, Trevor and Drew have these flashbacks to the houses past? Who was behind their classmates turning into zombie like creatures at the reunion dance? (Who hasn't wished for classmates to turn into zombies at one of those dances??)  Would Amber ever get together with Trevor? (yes that's right there is a whisper of a romance in this book-but just a whisper.)

One small problem I had in the beginning is that this was one of those books that doesn't have just one narrator and has multiple character point of views.  The story takes place at a high school reunion, so a lot of characters pop in and out of the story, and it was hard to understand why they popped in and out so much until the story concluded at the end of the book. Sometimes it still mystified me why some characters appeared but I think it was to get into the mindset of the bad guy and why he was out to get them.


All in all though, I have to say I was surprised at how much I liked this book and I was able to prove to myself that I can read books were romance was not the focal point of the story! I'm really hoping that this book becomes a series-if you are looking for a good scary story to read on Halloween, then look no further!
Posted by A Buckeye Girl Reads at 7:51 AM