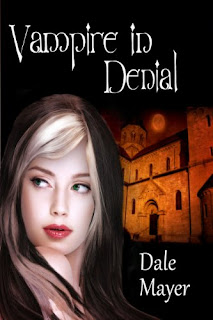 Like being a sixteen-year-old vampire isn't hard enough, Tessa's throwback human genes make her an outcast among her relatives. But try as she might, she can't get a handle on the vampire lifestyle and all the...blood.Turning her back on the vamp world, she embraces the human teenage lifestyle—high school, peer pressure and finding a boyfriend. Jared manages to stir something in her blood. He's smart and fun and oh, so cute. But Tessa's dream of a having the perfect boyfriend turns into a nightmare when vampires attack the movie theatre and kidnaps her date. Once again, Tessa finds herself torn between the human world and the vampire one. Will blood own out? Can she make peace with who she is as well as what? (goodreads)

Vampire in Denial was a quick, fast read, but I have to admit that my review for it is going to be all over the place because while there were things that I really loved about the book, there were also some minor things that made struggle to get through it.


Vampire in Denial is a great start to a new teen Urban Fantasy series. It has a spunky heroine, a love triangle an evil bad guy who everyone thought was dead, and a cliff hanger that made me forget that I thought parts of this book were slow. Tessa is a really strong heroine, and I liked how she grew more sure of herself as the storyline progressed. Cody was a great addition to the story, and he was a perfect match for Tessa. He let her do her own thing, but was there when it mattered the most.  I enjoyed how the two of them convinced everyone that there were rogue vampires out there doing stuff to humans that they shouldn't be doing. I loved the beginning of the story and the end, but the middle was a bit long as they searched and searched to find out where Jared was.

This book was divided up into two parts. The first part focused on Tessa learning more about her vampire half, and the struggle of having two sides that made her different then everyone else. The second half was about finding Jared and Tessa becoming more sure of herself and a leader in her family. In the first half we were introduced to Tessa's friends, then in the second half they seemed to have all disappeared and a whole new group of friends were introduced. The problem I had with this was that I just kept wondering what happened to the friends that were there in the first five minutes of the book when the action that set the storyline up happened went to. Other then that I enjoyed seeing her take change and bossing everyone around.


One of the things that made this book interesting, also gave me some minor problems with continuity.  I was about halfway through the book when I noticed that right before there would be a character point of view change, there would be a paragraph, then a single sentence, then a new paragraph with another point of view. The single sentences made the pov change jarring sometimes, and by the time I got used to the character the pov would change again to another person. I think it would have been less jarring to have Tessa be the narrator throughout the story rather then shift from Tessa, to Cody to Jared to other characters in the book. While I liked seeing the story from their point of view, it just made the continuity of  the story hard for me.  Despite those problems though, I enjoyed the world building and characters in this new series and after how this book ended I really can't wait to find out what happens to Tessa next!

Posted by A Buckeye Girl Reads at 8:15 AM