Excerpt & Giveaway (US Only) Deadly Sting by Jennifer Estep


Please help me welcome Jennifer Estep, one of my favorite authors to A Buckeye Girl Reads! She's here today with an excerpt and a giveaway of Deadly Sting, book 8 in the Elemental Assassin Series.  The giveaway is at the bottom of the post. 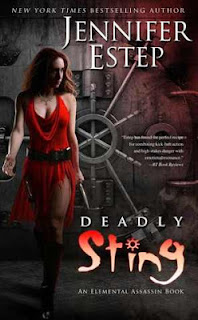 
Red is definitely my color.

Good thing, because in my line of work, I end up wearing it a lot. Most people shy away from blood, but for an assassin like me — Gin Blanco, aka the Spider — it’s just part of the job.

Still, it would be nice to get a night off, especially when I’m attending the biggest gala event of the summer at Briartop, Ashland’s fanciest art museum. But it’s just not meant to be. For this exhibition of my late nemesis’ priceless possessions is not only the place to be seen, but the place to be robbed and taken hostage at gunpoint as well.

No sooner did I get my champagne than a bunch of the unluckiest thieves ever burst into the museum and started looting the place. Unlucky why? Because I brought along a couple of knives in addition to my killer dress. Add these to my Ice and Stone magic, and nothing makes me happier than showing the bad guys why red really is my color.

But Bria hadn’t come alone. A giant who was around seven feet tall reached down and hauled the dwarf to his feet before slapping a set of silverstone handcuffs on the robber. The giant’s hair, skin, and eyes were all a rich shade of ebony, while his shaved head gleamed in the afternoon sunlight streaming in through the windows. Xavier, Bria’s partner on the force and another member of my makeshift, extended family.
Xavier finished securing the cuffs, then put one hand on the dwarf’s shoulder to keep the much shorter man from falling over. The dwarf’s eyes were slightly unfocused, and blood still dripped from the cuts I’d opened up on his face when I’d pistol-whipped him. Still, he surged forward at the sight of me.
“You bitch!” the robber screamed. “I’ll kill you for this!”
“Sure, you will,” I said in an easy voice. “Take a number and get in line with everyone else.”
Xavier tightened his grip on the dwarf’s shoulder, holding him in place, and let out a deep, rumbling laugh. “I’ll say this, Gin. There’s never a dull moment when you’re around.”
I winked at him. “I do my best to keep y’all employed—and entertained.”
Xavier laughed again, led the would-be robber over to the boutique door, and escorted him outside where a dark sedan with flashing blue and white lights waited by the curb.

Jennifer Estep is a New York Times bestselling author, prowling the streets of her imagination in search of her next fantasy idea. Deadly Sting, the eighth book in her Elemental Assassin urban fantasy series, was released on March 26. For more information, visit www.jenniferestep.com or follow Jennifer on Facebook, Twitter, and Goodreads.

Giveaway:
This giveaway is open to US Residents only. If I do not hear from the winner within two days, a new one maybe chosen. Maybe be contacted through email or blog post. Not responsible if item does not reach its destination
.

a Rafflecopter giveaway
Posted by A Buckeye Girl Reads at 12:00 AM