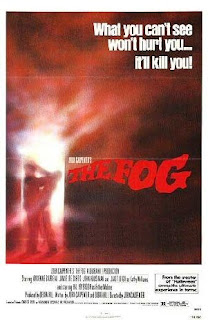 
I watched this movie in honor of the Zombie Challenge hosted by VVB32 Reads for Zombie Appreciation week. I wasn't sure if this really qualified as a zombie movie, but according to a website I found: A Guide to Zombie Movies, it's considered one.

What I loved about the movie was how it showed stuff that is considered politically incorrect today. People were drinking and driving and smoking! The horror!! Children called their mom, ma'am out of respect when in trouble. People still hitch hiked.

What I really loved was the ominous music that played when something was about to happen or secrets revealed...and Jamie Lee's feathered hair.

Elizabeth: "Are you normal?
Nick: "No, I'm weird."
Elizabeth: "Good!"
Kathy Williams: You're the only person I know who can make yes ma'am sound like screw you."
Nick Castle:
"I don't believe in luck. Good or bad."
"If anything happens just block the door." (yes, like that ever helped anyone!)
Dan: "It's Fog. You've seen it once, you've seen them all."
Stevie Wayne: "Stay away from the door!"
Father Malone: "No matter where we go it will find us." (cue incoming fog)

The movie begins with a storyteller dressed in a sailors uniform announcing to a group of children that it's 5 till midnight on the 20th of April. (You just know something is going to happen with an opening line like that!) He proceeds to tell one last story for the night:

It is said that on a night like this, 100 years ago on the 21st of April a ship was at sea when a fog rolled in. It was unlike any fog anyone had seen before or since. The sailors saw a campfire burning and tried to make their way to it. The thick fog enveloped them, and all were lost at sea. It is told by fathers, their fathers and grandfathers that when the fog returns the men who were lost at sea will come back, looking for the campfire....

When the story ends, it's midnight on the 21st of April. A lone radio is playing in the church as someone cleans it, and we're told it's the anniversary of Antonio Bay's founding. Weird things start happening...the foundations of the church begin to shake and a journal is found. When the priest opens a page it says "The hour between midnight and 1:00am belongs to the dead." We then hear pay phones ringing by themselves...in a convenience store, items begin to shake. An old sign is dislodged from the ceiling.

Other things start to happen...and you just know that the fog is going to roll in!! Which is does...and a ghost ship appears and attacks a ship at sea. People on the mainland are still clueless though. They start to get clued in that something's up when the ship that was attacked at sea, the SeaGrass doesn't show up the next morning-but excuses are made.

Then people start talking to each other about all the weird stuff that happened the night before....the plot really starts rolling, as does the fog.

Final Thoughts:
This is a classic horror movie, and a must see if you like this type of movie. :) It's also proof that you don't a whole lot of killing and mayhem to have a good scary movie! I just wish they had showed the zombies more-they were creepy.

Posted by A Buckeye Girl Reads at 4:00 PM