I can't believe I haven't posted anything since Monday!! My allergies attacked me big time this week and I haven't been able to do much of anything. To make up for my lack of posting, please help me welcome one of my favorite authors back to ABG Reads, Gini Koch! She's here today with an excerpt of her newest book, The Night Beat! There is an E-book Giveaway to one lucky person at the end of the excerpt! 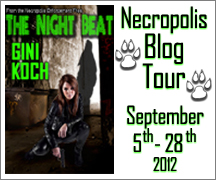 Thanks for stopping by on the Necropolis Enforcement Blog Tour of 2012! If you haven’t read the first chapter of The Night Beat, hit Deathless Prose over at my website (http://www.ginikoch.com/deathlessprose.htm) and check it out. Then, hit each stop along the way to get more of the story. Missed a stop? Check the website for the Tour Page  and get caught up.
And don’t forget to get entered to win a copy of The Night Beat at EVERY blog tour stop along the way! Plus, follow the Tour ‘til the end and get entered for a mega-prize! So, grab your badge -- it’s time to join Necropolis Enforcement! 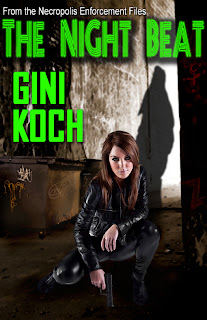 The majority of Prosaic City’s residents don’t know that their town exists on top of another place -- Necropolis, City of the Undead. For the most part, the two planes of existence manage to remain separate. And when they don’t, Necropolis Enforcement has beings in place to ensure the general human population remains blithely clueless.

Victoria Wolfe is more than just a policewoman. She’s an undercover werewolf assigned by Necropolis Enforcement to work Prosaic City Police’s Night Beat. Victoria’s comfortable working the shift where all the weird comes out to play, especially since her partner is also her perfect man. Or would be, if Victoria could ever work up the nerve to tell him she isn’t like other girls.

It’s hard enough being a werewolf in disguise, but when a creature from the Depths of Hell shows up in an alley preferred by junkies, bums, and hookers, it’s going to take more than just Victoria’s special gun and werewolf skills to subdue the ancient Sumerian demon. Especially when the demon is merely the start of what appears to be a major takeover attempt by the Prince of Darkness.

Soon all of Necropolis Enforcement’s Undead Brigade is involved in the fight to stop the Prince’s Major Minions from taking over Prosaic City and the rest of the human plane. But it’s Victoria who has to face the Adversary and figure out what intricate plan Lucifer has up his wings before everyone she cares about is destroyed.

In other words, it’s just another day on the Night Beat.

Now for the excerpt!

Taken from Chapter ten. To see what happens previously, check out Bibliognome's blog!
We went flying -- in the vamps’ cases under their own control -- as Jack fired. The riot gun held a lot of shots and it looked like he planned to use them all.
I hit the wall over the trashcans and fell onto the top of one. Mercifully, the lid was down and the thing was packed so full I didn’t crash through. I was between Jack and Slimy, so I had a great view. Which was nice, because I’d spent a lot of time being the tetherball and I couldn’t really move.
Jack was firing, calmly and consistently, laying down a steady stream that hit Slimy all over the place. He was also advancing while firing. Slimy, meanwhile, seemed somewhat rocked but not stopped, and he was advancing, too. At current rate and speed, they were going to slam into each other in front of me.
Jack knew it, too. He maneuvered himself in front of me, so he was between me and the monster.
I, as the Count put it, panted after Jack because he was literally the most manly man I’d ever met, seen or smelled. And he was in full-on manly mode at the moment. I was lucky the moon wasn’t full -- I’d have been crawling on the ground in front of him, whining, with my tail up, in between rolling on my back and offering the full on “I’m your puppy mamma” routine. Hey, there are some things a weregirl can’t control.
“Can you move?” he asked me, still watching Slimy and firing steadily.
“Sort of.”
One of the undead benefits is an ability to concentrate on more than one thing at a time. As a werewolf, I had enhanced senses under normal situations, let alone during battles. So I’d counted the number of shots because I could and you learned to do things like that because they helped you stay unalive. And I knew Jack was out of ammo.
He did, too. He tossed the gun back towards the car, turned, grabbed me, flung me over his shoulder, and ran. It would’ve been more comfortable if I’d been in human or werewolf form, but I didn’t complain. Slimy stomped the trashcan I’d been on about two seconds after Jack grabbed me.
We reached the car and he tossed me in it. I got the impression he was going to attempt to drive away, but he went to the trunk. I remembered what we had in the trunk. “I don’t think an urban assault rifle is going to help,” I called to him.
“Can’t hurt.” He leaned against the car and fired. This seemed to affect Slimy, but it was still coming towards us. “Any suggestions?” 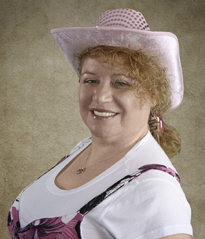 About the Author:
"Gini Koch lives in Hell’s Orientation Area (aka Phoenix, AZ), works her butt off (sadly, not literally) by day, and writes by night with the rest of the beautiful people. She writes the fast, fresh and funny Alien/Katherine “Kitty” Katt series for DAW Books, the Necropolis Enforcement Files series, and the Martian Alliance Chronicles series for Musa Publishing. As G.J. Koch she writes the Alexander Outland series for Night Shade Books. She also writes under a variety of other pen names (including Anita Ensal, Jemma Chase, A.E. Stanton, and J.C. Koch), listens to rock music 24/7, and is a proud comics geek-girl willing to discuss at any time why Wolverine is the best superhero ever (even if Deadpool does get all the best lines). She speaks frequently on what it takes to become a successful author and other aspects of writing and the publishing business. She can be reached through her website at www.ginikoch.com"
Where to Find/Buy the book:
Amazon Kindle Edition | Amazon Paperback | Smashwords | Barnes and Nobles 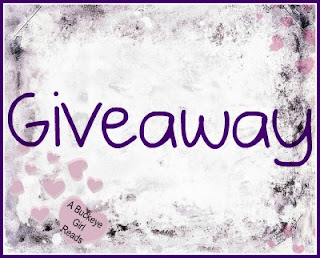 I am giving away one ebook copy of The Night Beat to one person! Giveaway is open until September 28, 2012. If I do not hear from the winner within two days of contacting them either through email or a winners post, a new one will be chosen. Not responsible if the winner does not see the winners post. The winner may also be contacted through email and not necessarily in a winners post. Please leave an email address so I can contact you if you are the winner.

Posted by A Buckeye Girl Reads at 8:16 AM