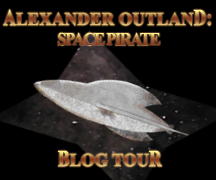 I was hoping to get in my review of this book before today, but it didn't happen. I just want to say that I LOVED it. I really didn't think I would be able to read a science fiction book, but I was wrong. This one had me laughing out loud, and there is an underwater scene that had me cringing...this book was just a lot of fun!! Please help me welcome G.J. Koch, who also writes under the name Gini Koch back to a Buckeye Girl Reads. I had to include her in my birthday bash because her Katherine "Kitty" Katt series is one of my all time favorite series. That being said, Nap comes awful close to beating Martini in the book boyfriend club and I didn't think that could happen!! Gini is here to tell us about Alexander Outland: Space Pirate and she is giving away one paper version of the book & one version of the ebook. 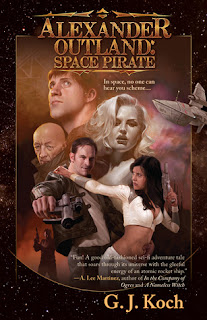 Can you tell us a little about Alexander Outlander: Space Pirate? Sure! In Alexander Outland: Space Pirate, trouble’s brewing out in space, and Alexander Outland -- the least likely hero in the galaxy -- and his eccentric crew have to save the day, despite the fact they’d prefer to take the money and run. Alexander Napoleon Outland is the best pilot, and ladies’ man, in the galaxy. But Nap, as his friends call him, is more than that -- he’s a schemer with a heart of gold he desperately wants to hide, a soft spot for other people’s cargo and his exotic weapon’s chief, and the unerring ability to find the biggest misfit on any planet or space station and somehow join that person onto his crew. Nap’s not your classic hero, but that tends to make him the right guy for the job…whatever the job happens to be. He’s a little bit Han Solo, a little bit Malcolm Reynolds, a little bit Captain Jack Sparrow, and a whole lot of fun to fly with. There are aliens, explosions, telepaths, donkeys, space pirates of all kinds, and a galaxy-wide conspiracy. And the most horrifying “underwater” trip any crew’s had to face in a long, long while. But mostly, there are laughs. And I don’t say that lightly. This series is actually funnier than my Alien/Katherine “Kitty” Katt series. And if you like Kitty, I really think you’re gonna love the Outland

Did one character stand out the most to you? That’s a hard one to answer because I’m the author. They ALL stand out to me or else they wouldn’t have made the cut. It’s more interesting for me to see which character(s) my readers attach to the most and why. But, if forced to choose, probably Nap, since he’s the main character. But all of them, at one point or another, impressed upon me their need to be “in” the book and stay in the book. Even the ones I killed off.

How did you come up with the title? I ran across this name and it just sort of screamed Space Pirate to me. A fun, cool space pirate. I started thinking about what he’d be like, and the rest came from there. Most of my story ideas don’t come from that simple a place, but this one did.

Did any character become a scene stealer? You know, all of them, really. I’m such a linear writer that I truly don’t know who’s going to do what until they do it. So, at one point in time, each character stole scenes for me. And each one became more than I thought they were as the book went on. Well, I say that, but some actually became less than I’d expected. And yeah, that’s a teaser, of a sort. LOL (Readers, see if YOU can figure out who I thought would have a larger role but didn’t!)

Do you have a favorite scene, if so what is it? My fave scene is the scene that seems to already be dividing readers -- the “underwater” sequence. I’ll say no more, but I honestly enjoyed writing that, every word of it, so that’s probably my favorite.

What is your most favorite thing about Nap? The worst? I love how cocky he is, while at the same time his feelings can be quite easily hurt. He cares deeply about the people who matter to him, even though he doesn’t want to admit it. I like that he desperately wants to be a bad guy but just can’t really manage it for a variety of reasons. My least favorite thing? Hmmm…nothing, really. I enjoy this character and really love writing him and the rest of his crazy crew.

What song or soundtrack best fits the book? Three songs in particular: Abba’s “Waterloo”, “Space Boy” by Splender, and “Space Cowboy” by *NSYNC probably more than anything else. I know, I know. Other than the Splender song, it’s humiliating to admit to this level of pop music reliance, right? Well, just wait. It gets worse. For whatever reason, and a part of me is almost embarrassed to admit it, in addition to the ONE Splender song and the ONE *NSYNC song, there were 9 Abba songs that really “worked” for me for this book. I listened to them nonstop. The hubs practically cried when I finished this book (he is NOT an Abba fan, and the less said about *NSYNC for him the better; though he’s a-okay with Splender, for those keeping score at home). And, since I know you’re gonna ask, all 9 Abba songs were: 1. Waterloo 2. Honey, Honey 3. S.O.S. 4. Mamma Mia 5. Money, Money, Money 6. The Name of the Game 7. Does Your Mother Know 8. Take a Chance on Me 9. Angeleyes And no, before you ask, I didn’t listen to Aerosmith or any other hard rocking band during the writing of this book. Well, I tried. But only Abba and those two other songs worked the musical magic on me for this one. That’s right -- I listened to a total of 11 songs, over and over and over again, until the book was done. (The hubs asks for your pity, which I’m sure he’s getting right now.) And, shocking absolutely no one, note how much longer the music-related-question’s answer was than any other. Yeah, that’s pretty much how I roll. 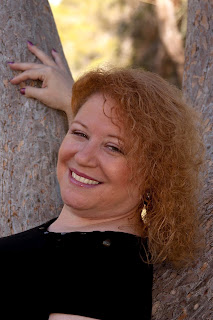 BIO G.J. Koch writes science fiction. Not the hard stuff, though. Because that requires actual scientific knowledge or at least actual scientific research. Knowledge may be power and research may be cool, but they take time away from writing jokes, action, and romance, and being witty in the face of death is what it’s really all about. Check out G.J.’s rollicking Alexander Outland: Space Pirate series from Night Shade Books and reach G.J. at Space…the Funny Frontier (http://www.ginikoch.com/GJKbookstore.htm). 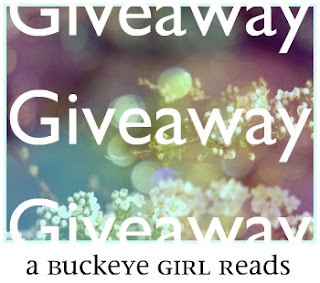 This blog tour is giving away 1 paper book of Alexander Outland: Space Pirate and 1 ebook copy. Please be aware that the paper book is only open to US Residents, but the ebook version is open internationally! To enter just leave a comment about who your favorite science fiction character is and an email address or twitter handle so I can contact you if you win.  Giveaway is open until 11:59pm May 22, 2012.
a Rafflecopter giveaway
Posted by A Buckeye Girl Reads at 8:00 AM