He's her kinkiest desire, if she's willing to open her heart and believe in him.
The dead don't always rest in peace. Some stick around to make the lives of the living hell on Earth. Ryan Black knows the frustration of dealing with the dead. He's a Ghost Explorer. He's conquered houses filled with apparitions, abandoned school buildings that house angry vermin, and managed to woo the female population of Snake Falls, Ohio. But he's about to face his toughest challenge—convincing sceptical Samara Jacobs she not only shares his gift, but holds his heart. Women fall at Ryan Black's feet and Samara's determined not to be one of the many—that is until she's forced to work with him. He's certain ghosts exist and willing to prove it. As she gets to know the man behind the television persona, she decides the handsome klutz who chases things that go bump in the night isn't so silly after all. But is he worthy of her love? 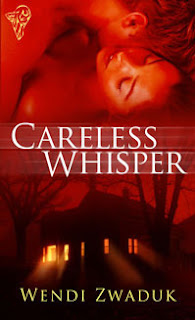 
I love books that are outside the box of their genre. Careless Whisper is one of those books.
Careless Whisper is not your typical erotica. It's told mainly from Ryan's point of view, and it was so much fun watching him fall for Samara and try to win her heart. Samara didn't believe in ghosts, even though she worked for Ryans team.  It was equally fun watching her fall for Ryan and believe in things she didn't think were possible.

The thing that surprised me was that this was one of the rare eroticas where I was as into the story line going on as much as the sex happening with the main couple. There is more then Ryan  and Samara that meets the eye and it was fun figuring out what was going on with them and what they were witnessing. The only thing that bothered me was that almost every time Ryan referred to Samara to other people it was as his spiritual mate. I couldn't figure out why he kept using that term. However, the closer I got to the end of the book the more sense it made, but for the longest time I couldn't get why he kept calling her that.

All and all Careless Whisper was an enjoyable read and I liked how different it was. I would say more about how it's different, but I don't want to ruin the things that surprised me about it.

~Sorry for the lack of meters, but blogger was driving me crazy when I tried to post this review.
Posted by A Buckeye Girl Reads at 11:38 AM