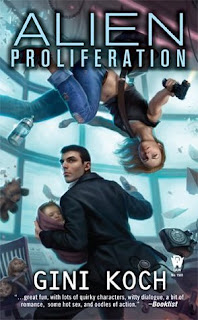 Alien Super-Being Exterminator Kitty Katt is expecting her first baby. But the alien attacks are getting more dangerous, and now Kitty and her Alpha Centaurion husband, Jeff, have to find out who's behind the conspiracy to kill Kitty's secret agent mom and what caused Kitty's transformation into a superhuman-and they've got to do it all before the baby shower...
Alien Proliferation is like seeing your favorite science fiction film in action.  The bad guys never stop coming and you never know what will hit you next. It's so much fun that the pages almost turn on their own. The characters in this series have become like close friends to me. The thing that I enjoy most about this series is that no secondary character is forgotten. All are included in the storyline and don't just show up for filler for one lousy paragraph. This series is like a breath of fresh air because Kitty and Jeff Martini (My kindle's namesake) actually have a romance! They don't fight or break up in each book, but are together the whole time. It's not all smooth sailing, and I have to say that I love the jealousy talks that the two of them have to reassure each other that they are the only ones for each other.

Martini is one of my all time favorite heroes. I love how he is always apart of the action, but somehow always needs saving by Kitty.  His cousin Christopher is just adorable. I can see why he has so many fans, and I loved how he had a much larger role in this book. While Martini stole my heart, I have to say that my dislike of Chuckie ended with this book. No one was more surprised then I was with that revelation! I liked how he was always there for Kitty and how he didn't automatically like Martini just because Kitty did. It made Kitty and Jeff's relationship all that more real.

Kitty is one tough heroine. She will have you rolling your eyes, laughing out loud and shaking your head in disbelief. Her Kittyisms like: "Okeydokey Richard and I are off to save the world while the rest of you save everyone else we happen to love. Chop, chop times a waistin'." were in full force and better then ever. The only thing that bugged me was how many times Kitty mentioned that she had to breast feed the baby. Maybe it's because I'm not a mom, but I just didn't get why it was mentioned so much. Other then that though, Kitty was in rare form and I enjoyed seeing her as a mom.

One of the best thing about this series is that just because Kitty has a new life doesn't mean her old friends from her life before Martini and gang are forgotten. This story centers around her friend Amy from high school and helping her get out of trouble while saving the world. Amy was a great addition to the other characters that I've come to know and love in this series.

Alien Proliferation is unputdownable and just when you think you have everything figured out, something happens that just makes you go wait, what just happened here? I adore that about this series. There is just never a dull moment when Kitty and Martini are in action. Have I mentioned that they are my new favorite book couple? I don't think that anything can get in their way and I can't wait to see what happens to them next in Alien Diplomacy.

Martini to Kitty: "You really fell in love with me the first time you looked at me? He sounded like he didn't believe it but hoped it was true. I turned and looked at him. "The moment you smiled at me I was hooked and by the time you told me your name I was yours."