Review:: To Seduce An Earl by Lori Brighton 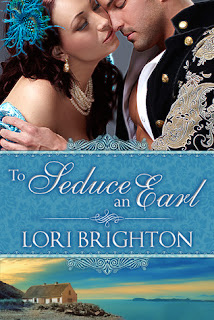 Title: To Seduce an Earl
Author: Lori Brighton
Genre: Historical Romance
Series: Seduction #1
Publisher: Self-Published
Number of Pages: E Book
Source: Sent
On the outskirts of London in a meadow of lavender, sits a house of esteemed ill repute. But this is no house geared toward pleasing men. No, this house is for women who have come to seek their own delight. And for three young ladies it’s where they’ll find something completely unexpected…true love.Grace Brisbane will do whatever it takes to save her dying mother, but with a stepbrother intent on gambling and drinking, their funds have run dry. What’s a girl to do when she’s left poor and destitute? Seduce an Earl, of course. Handsome and rich, the Earl of Rodrick is the perfect target. Unfortunately, Rodrick despises innocent virgins. There’s only one place where Grace can learn the secrets of seduction… Lavender Hills. The moment Grace spots Alex, the man who will teach her the ways of intimacy, she knows she must guard her heart. Alex is charming and gorgeous and completely inappropriate.As a young man, Alex Weston is blackmailed into working at Lavender Hills in order to save his family from London ’s prisons. There could be worse ways to spend his days and nights. Still, seduction has become a chore and thoughts of freedom keep him up at night. Until he receives a new client, the sweet Grace Brisbane. He should be thinking only of his growing need to escape, instead he’s captivated by the lovely Grace. The more time they spend together, the more he realizes that their brief meetings aren’t enough. For while marriage between a lady and a whore could never happen, Alex knows in his heart that he is willing to accept nothing less.  (goodreads)

One thing I love about Lori Brightons books is that she is not afraid to be a risk taker. Her story lines are never quite what you expect and her heroines are headstrong & heroes lovable. I wasn't sure what to expect with Seduce An Earl because it's one of the few books by Lori that doesn't have anything paranormal happen in it.  Here are five reasons this book isn't your typical historical romance:

5. Romance I loved the dynamics between Grace and Alex. Grace is so headstrong and it was nice not to have a wishy washy heroine. I loved how she fights for Alex and tries to save her family at the same time. Her step brother and the Earl of Rodrick who they try to marry her off to were fun to cheer against.

4. Passion They have sex before marriage-gasp! Normally in historical romances they couple is married, or is forced to get married after sex but in this case the passion part of the book came awhile before

3. The heroine is the one who convinces the hero that he's a better person. Normally in romances the heroine is always full of self doubt, and the hero convinces her that she is strong and solve what ever problems they are facing. The heroine, Grace convinces Alex that he can do better and isn't the lowlife that he's been told he is. Grace does need Alex's help in the book to get out of a tricky situation, but I don't think he could have done it without her encouragement to him in the first half of the book.

2. The hero is the one who  needs rescuing instead of the heroine. Alex was taken as a young boy with two other boys to Lady Lavenders and told if he didn't stay she would tell the government about his Russian family that had noble ties and ruin them. (This was around the time of the Romanvs and titled Russians weren't popular too many places.) The only problem I had with this was I kept wondering why he just didn't leave now that he was older. Surely he could've protected his family somehow or found out if she was telling the truth about if that would really hurt his family's name. Lady Lavender did have a psychological hold over Alex, but I still had a hard time being convinced that he and the other guys wouldn't just leave now that they were older. There were reasons that these boys were taken, but I don't want to spoil it by saying what it was.  I'm not sure why I had a problem with this part of the story, because when the roles are reversed, and it's a female in this situation I have no problem with it.

1.  The Happily Ever After  Grace and Alex's happily ever after was actually a realistic one. I liked how everything came together at the end of the book, but was not unrealistic. I really felt for both of these two but loved how loved conquered all, even if it came with a bit of  a price.


To Seduce An Earl was enjoyable because it was so different and I can't wait to see where this series goes next.