This is a phrase you won't hear much with an erotica series-but it was just plain cute. I was really surprised at how much I loved each of these novellas. This series revolves three best friends: Phoebe, Brice and Jocelyn.  These poor girls always wound up in the middle of a mystery and I loved how they were always there for each other and didn't let their relationship with a guy get in the way. They always meet for Monday Lunch, and I gotta say I always felt bad for that poor guy with the barbs they sent his way. :)  These can be read as stand alones, but I don't recommend it.

Title: All For Lust
Author: Stormy Knight
Genre: Erotica (mystery)
Series: The Three Bustiers #1
Number of Pages: n/a E book
Publisher: Sapphire Nights
Source: Sent
The first of the friends we meet is Phoeb, who is a paralegal.  The girls are bored being single and decide to do something about it. For fun they decide to dress up in disguise and go to one of the racier clubs that Richmond, Virgina has to offer. While they are though, she runs into one of her bosses clients-Collin Wagner. The two hook up, and just as I thought the mystery storyline was going to go to the wayside and it would just be about sex-hot sex, this novella surprised me.  The guy who Phoebe's friend Brice stumbled into a crime ring she shouldn't have and gets kidnapped. I don't want to give anything away, but Jocelyn, Phoebe and Collin all work together to find Brice and help the police solve the a case they've been working on for awhile. All for Lust made me laughing out loud while at the same time needed a fan to cool myself down-because it was smokin. The ending had a twist I didn't see coming and am still a bit upset over it. 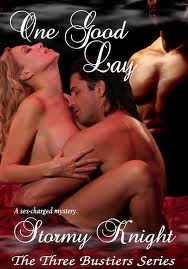 In One Good Lay we get to meet Brice, who was kidnapped in the first book. What impressed me about the second book in the series was how different it was from the first. We have a menage, and another new mystery to solve.   Brice is a Nurse Practitioner and meets Drew at work. The opening scene had me rolling with laughter and hot at the same time. The two meet up again when Brice, Phoebe and Jocelyn decide to try to find guys at a charity event. They've decided that the night clubs aren't their scene anymore after what happened to Brice in book one. Drew and Grant have been best friends forever, and met Brice at another social function and decide that she would be perfect for them to have a menage with.  Brice meets Grant and is attracted to him as much as she is Drew. However, her friend Jocelyn gets accused of murder, and Brice, Phoebe, Grant (who happens to be a former lawyer and current mystery writer) and Drew work to prove she's innocent. The only thing that bothered me a bit was that what happened to Brice in book one wasn't talked about much in this one..but this is after all a novella, and can't cover everything like a full length book can.  Once again the sex scenes were super hot, the girls were hilarious and the ending had a nice twist I should've seen coming but didn't.

Steaming Up is Jocelyn's story.  She's a bit gun shy around men because of what happened to her in the previous books (men keep getting murdered after having sex with her) and she's happy that she can rely on her neighbor, Royce. Jocelyn was a little hard to like in the first two books, so I liked how we got to see a softer side to her. She tries so hard to do the right thing with Royce-she doesn't want to ruin their friendship by sleeping with her, but Royce is tired of just being friends with her. He doesn't understand why she's going out with everyone but him. I loved watching these two battle it out and then work together to solve the mystery of what happened to Royce's business partner who was murdered. This was my favorite mystery of the three, and by the end of the book I wanted to be a Three Bustier!


These books were super hot and fun to read. I am really hoping that poor Phoebe gets at least one more book for reasons I can't state because I don't want to ruin book one!

This is for all three books: