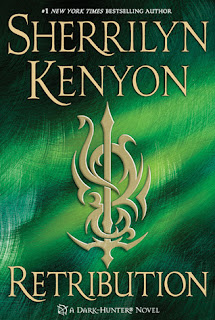 A hired gunslinger, William Jessup Brady lived his life with one foot in the grave. He believed that every life had a price. Until the day when he finally found a reason to live. In one single act of brutal betrayal, he lost everything, including his life. Brought back by a Greek goddess to be one of her Dark-Hunters, he gave his immortal soul for vengeance and swore he’d spend eternity protecting the humans he’d once considered prey.  Orphaned as a toddler, Abigail Yager was taken in by a family of vampires and raised on one belief—Dark-Hunters are the evil who prey on both their people and mankind, and they must all be destroyed. While protecting her adoptive race, she has spent her life eliminating the Dark-Hunters and training for the day when she meeting the man who killed her family: Jess Brady. A gun in the hand is worth two in the holster… Jess has been charged with finding and terminating the creature who’s assassinating Dark-Hunters. The last thing he expects to find is a human face behind the killings, but when that face bears a striking resemblance to the one who murdered him centuries ago, he knows something evil is going on. He also knows he’s not the one who killed her parents. But Abigail refuses to believe the truth and is determined to see him dead once and for all. Brought together by an angry god and chased by ancient enemies out to kill them both, they must find a way to overcome their mutual hatred or watch as one of the darkest of powers rises and kills both the races they’ve sworn to protect.

It's sad when a beloved series loses it's mojo. Even more sad when the best thing about the book is it's cover.  The poor  Dark Hunter series has at book number 20, lost that loving feeling for me.  I never ever thought I'd say this, but Retribution was a do not finish for me. It pains me to write it, because as I've stated before this is one of my all time favorite series.

I haven't read the Chronicles of Nick yet,(because I think it's stupid to have 10 books to get to one dark hunter book)  but friends have told me that it's like the author has poured everything she has into that seires and well, you can tell with this book. It's almost like a different writer wrote this one then the earlier novels of this series. Maybe I shouldn't be so harsh as I only got a hundred pages into this book, but with lines like:


pg.22 " Why are you more nervous then a whore at a preachers doorstep?" and this one
Pg 42 ~"Still he didn't take a lickin and not give one back."
og.79 Other than the fact that you're as loco as a three tailed cat in a rocking chair factory, I'm as clueless as a newborn colt."
pg. 86: "It's not what you think Z. Turn on those god powers and use them. I am not responsible for her knowledge of nothing."
Pg. 87:  Ew. Someone was socially awkward. She wasn't sure at this point if she liked Z or not. He was rather off putting.
made it impossible for me to go any further.  I know that Jesse was born in the 1800s and was a gunslinger, but seriously, I don't even think gunslingers talked like that.  When the actual storyline started, I groaned out loud. It was another-I'm going to hate you for the whole book because I think you're evil  till I find out I was lied to then I won't be able to live without you  storyline I just couldn't get into it as much as I forced myself to keep reading it.

Another issue I had was that when the Dark Hunters whip out their cell phones or computers they are all apple products. All the I phone product placements just didn't sit well with me for some reason. I mean, I don't even see J.R. Ward doing such obvious product placements with her popular Black Dagger Brotherhood Series, and if anyone could get away with it, she could.

Also, when I learned that Acheron and Simi weren't even in the book until the bonus chapter I was like how can this be? They are the dark hunter series!    How can Simi not have her BBQ or shinys to play with? Or are they too busy making cameos in Nicks books to be in the Dark Hunter world now?  Despite my misgivings on this book, I tried to skim it...but here were some other cheesy lines I found:


pg.194  Nothing left of Jonah except a shimmering film that graced the floor. Iridescent like the wings of a summer butterfly.


pg.263: Life seriously needed an undo button. The coward in her wanted to turn around and run. But she'd never been a craven a day in her life, and she wasn't about now when they needed her to stand strong.  (I'm assuming craven is supposed to be coward, but you get the point..)


I can't remember the last time I was so disappointed in a series book. I just want the old Dark Hunter series back, and if I have to wait through 6 more stupid Nick YA books to get it then, I will,. But please, please don't churn out another DH book just trying to make the fans happy. because you've just about lost this fan doing that. I'd rather wait and have a quality one then what the last 3 have been. This review is kinda harsh,  but mainly because of how drastically disappointed I was in reading this book. That being said, I'll still buy whatever Dark Hunter book comes out next. What can I say? I'm an optimist and the next one can't  any worse.

Posted by A Buckeye Girl Reads at 7:53 AM