Review: In the Forests of The Night by Kersten Hamilton 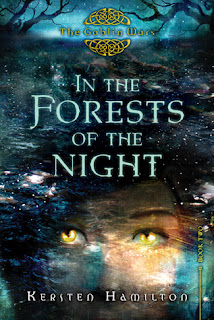 Title: In The Forests of The Night
Author: Kersten Hamilton
Genre: Young Adult/Fantasy
Series: Goblin Wars 2
Publisher: Clarion
Number of Pages: 288
The battle against goblinkind continues . . . but which side will Teagan be on?
Teagan, Finn, and Aiden have made it out of Mag Mell alive, but the Dark Man’s forces are hot on their heels. Back in Chicago, Tea’s goblin cousins show up at her school, sure she will come back to Mag Mell, as goblin blood is never passive once awoken. Soon she will belong to Fear Doirich and join them. In the meantime, they are happy to entertain themselves by trying to seduce, kidnap, or kill Tea’s family and friends. Tea knows she doesn’t have much time left, and she refuses to leave Finn or her family to be tortured and killed. A wild Stormrider, born to rule and reign, is growing stronger inside her. But as long as she can hold on, she’s still Teagan Wylltson, who plans to be a veterinarian and who heals the sick and hurting. The disease that’s destroying her—that’s destroying them all—has a name: Fear Doirich. And Teagan Wylltson is not going to let him win.(Amazon.)
For those of you who were wondering if the titles in this series sound familiar, it's because they are. They are taken from the poem Tyger, Tyger by William Blake.   If you are in the mood for something unique, then I recommend you give this series a chance. In The Forests of The Night is book two in the Goblin Wars and does not work well as a stand alone book. My review for Tyger, Tyger book one can be found here. Events happen in the first book that are critical in this one. This book ends right where the first one picks up and Teagan, Finn and her brother are readjusting to life after running for their lives in Mag Mell-a place where time runs differently and you never know who to trust or what creatures you'll run into.

Tea is such a fun heroine. She is still getting used to the fact that has Goblin blood in her and is afraid that she'll stop being who she is and turn into something evil. I loved how Tea struggles to overcome what she sees herself becoming and others telling her that she will be the same girl if she stays true to herself. I also really enjoyed how the friends that Tea, Finn and her brother Aiden made in Mag Mell that returned to this world with them all have problems adjusting.  The friends in this world have trouble with the friends from that world as well. It's hard to communicate with someone you can't see, but know is there.

Another great thing about Tea was that  she was determined to get on with her life and not let the fact that she was now different change her. She still had goals, one of which was too protect animals from being tested on. This was talked about a lot during the first half of the book, so much so that I wanted to say "Ok, I get that testing on animals is bad already" but at the same time I liked how passionate Tea was about the subject and how she wanted to work with animals when she got older. It was nice to have a heroine who not only had a boyfriend but was interested in something else other then her boyfriend. :)

Finn, who I loved in the first book gave me fits in this one. I kept changing my mind from really liking him to finding him a tad overbearing in his protection of Tea. What I did like was how both of them interacted with people who Tea liked and it was just all about them. Some of my favorite scenes were with Finn and Tea's best friend Abby-who I adored. Abby was always there for Tea, and let Finn know that if he hurt her friend he better watch out, because she was there for her. I really hope that in the next book Abby somehow gets to go into Mags Mell with Tea and Finn.


One of the unique things about this book was that creatures and people from the Mag Mell come into this world. For some reason this, along with all the new secondary characters introduced confused the heck out of me in the beginning. This is one of the few times that I wished I had a paper version of a book instead reading it on my kindle. I kept wanting to flip back and see who was who, but couldn't. E books make it hard to go back and read something without losing your current place.

All in all though, this was an enjoyable, refreshing read. I loved how it focused on the girl becoming something different instead of the girl falling for the guy who was different. :)

In the forests of the night,
What immortal hand or eye
Could frame thy fearful symmetry?

In what distant deeps or skies
Burnt the fire of thine eyes?
On what wings dare he aspire?
What the hand dare sieze the fire?

And what shoulder, & what art.
Could twist the sinews of thy heart?
And when thy heart began to beat,
What dread hand? & what dread feet?

What the hammer? what the chain?
In what furnace was thy brain?
What the anvil? what dread grasp
Dare its deadly terrors clasp?

When the stars threw down their spears,
And watered heaven with their tears,
Did he smile his work to see?
Did he who made the Lamb make thee?

Tyger! Tyger! burning bright
In the forests of the night,
What immortal hand or eye
Dare frame thy fearful symmetry?