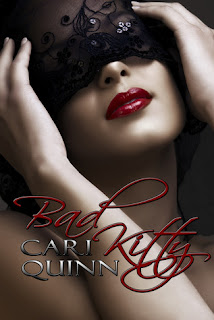 Title: Bad Kitty
Author: Cari Quinn
Genre: Erotica (contemporary)
Publisher: The Wild Rose Press
Number of Pages: 71 (EBOOK)
Source: Sent by the author
Release Date: Oct 7, 2011
Reformed bad girl Nikki Carson has spent the past year trying to forget her boss's Halloween party and the unbelievable sex she had with her boss's hot twin, Patrick Nolan. Patrick hasn't mentioned that night since, much to Nikki's endless disappointment.Years of following in the wake of his womanizing brother cause Patrick to wonder if Nikki even knows which twin she slept with. He can't believe she could possibly prefer him over her slick, polished boss. That doesn't mean he's been able to stop fantasizing about taking her again. Against the wall. On the floor. Everywhere.It's Halloween again, and trick or treat takes on a whole new meaning when Nikki and Patrick go for round two. Especially since Nikki's come prepared with a Domme kitty costume meant to drive Patrick wild. And this kitty's ready to show her claws if she doesn't get what she wants... (goodreads)
Bad Kitty is the third novella I've read by Cari Quinn, and my most favorite of the ones I've read by her. Novellas are funny creatures. It's hard to get the storyline just right because of how short they are in length, but Cari Quinn is an excellent example of how it's possible to create characters to love and rally behind in a short amount of time.

This was a great Halloween read, and I know that I'll be reading it again once it gets closer to the holiday. Nikki meets her bosses twin brothers at the Halloween party her boss throws every year. They hooked up, and Nikki has spent all year trying to figure why he hasn't called or shown interest in her when it was one of the best nights of her life.   Patrick on the other hand is convinced that Nikki thought she was hooking up with his brother and not him, because most women go for his brother Easton. When Halloween rolls around again, Easton convinces his brother to go to his party because he has other plans, Patrick agrees because he knows he'll get to see Nikki again who he hasn't forgotten about.

Patrick is surprised when Nikki lets him know that she knows it wasn't her boss she hooked up with because so few people can tell them apart, but as his brothers Admin Assistant she can tell the difference. When the two finally get together it's well worth the wait. This novella is so short that if I say more I'll give the entire storyline away, so I'll just say that by the time I got finished reading this I needed a fan to cool me down with because it was hawt with a capital H!  I had this read in an under an hour, and I have to say I was impressed with how much I liked both Nikki and Patrick. I also really liked his brother Easton and am hoping we'll get to see more of him sometime soon! Bad Kitty was definitely a Halloween treat!