Author Guest Post & Giveaway with: Jennifer Estep who talks about Villians and more


Please help me welcome one of my favorite Urban Fantasy authors, Jennifer Estep to A Buckeye Girl Reads. In the Elemental Assassin series the villain, Mab Monroe is one of my all time favorite villains, so I asked Jennifer to talk about who her favorite villains were...


Greetings and salutations! First of all, I want to say thanks to Colette for having me on the blog again today. Thanks so much, Colette!

So today, Colette wanted me to write something on villains since my heroine Gin Blanco will finally go toe-to-toe with her nemesis Mab Monroe in Spider’s Revenge, the fifth book in my Elemental Assassin urban fantasy series that comes out on Sept. 27.

Ah, villains. They can really make or break your story. A villain should make your heroine elevate her game and really push her to her limits – and beyond. That’s what I hope I’ve done with Mab, and here’s hoping that readers enjoy watching Gin’s showdown with her.

But in the meantime, here are a few villains from books, movies, and TV shows that have entertained me over the years:

Darth Vader: He cuts off your hand, then tells you that he’s really your long-lost, presumed dead father – and that you should go over to the dark side with him. It doesn’t get much more villainous than that.

Alan Rickman as the Sheriff of Nottingham in Robin Hood: Prince of Thieves: Rickman is so sarcastic and such a weasely backstabber as the sheriff. He gets all the good lines (“Well, at least I didn’t use a spoon”), and he totally makes this movie for me.

Alan Rickman as Hans Gruber in Die Hard: Have I mentioned that I like Alan Rickman? He also does a great job as the villain matching wits with Bruce Willis in Die Hard.

Gaston in Beauty and the Beast (the Disney version): How can you not love a villain who sings about how awesome he is? Sure, Gaston may be cartoonish (excuse the bad pun), but he’s entertaining.

Faith on Buffy the Vampire Slayer: I liked Buffy, but it always looked like Faith had much more fun being the bad slayer – even though Faith maybe wasn’t quite as bad as everyone thought she was.

Spike on Buffy the Vampire Slayer: He started out as a villain, but Spike became the ultimate bad boy love interest as the series progressed. It’s hard to redeem a villain, but this show (and James Marsters) did it.

The evil queens/stepmothers/witches in fairy tales (and the various versions of them): These ladies always have some scheme up their sleeve, like making their stepdaughter work as a slave and keeping her from her prince (Cinderella) or wanting to feed her a poisoned apple (Snow White). I also like Angelica Huston as the evil stepmother in the movie Ever After.

Ernst Stavro Blofeld in the James Bond series: I’m a huge James Bond fan, so I have to put Blofeld on my list, if only because he has as many lives (and incarnations) as his white cat. Telly Savalas was especially good as Blofeld in the movie On Her Majesty’s Secret Service.

Dr. Evil: His elaborate schemes and death traps never seem to quite work out (sharks with laser beams), but he’s another villain who’s always entertaining to watch.

Voldemort in the Harry Potter series: Any wizard who will split up his own soul so he can’t be killed is definitely hard-core evil.

So there you have it – some villains that I like. What about you guys? Who are some of your favorite villains?

Where to find Jennifer:

Giveaway is open to US Residents only, sorry! To enter the giveaway just answer the question Who are some of your favorite villains? and leave an email address if it is not on your blogger profile so I can contact you if you are the winner. You do not have to be a blog follower to enter, but it would be nice! Giveaway is open until Sept 26, 2011 @ 10pm EST. If I do not hear from the winner within two days of contacting them I will, unfortunately have to pick a new one. 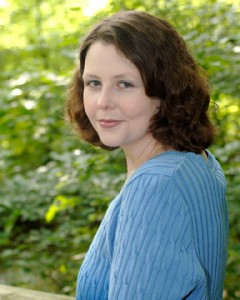 USA Today bestselling author Jennifer Estep writes the Elemental Assassin urban fantasy series for Pocket Books. The books focus on Gin Blanco, an assassin codenamed the Spider who can control the elements of Ice and Stone. When she’s not busy killing people and righting wrongs, Gin runs a barbecue restaurant called the Pork Pit in the fictional Southern metropolis of Ashland. The city is also home to giants, dwarves, vampires, and elementals – Air, Fire, Ice, and Stone.

Books in the series are Spider’s Bite, Web of Lies, Venom, and Tangled Threads. Spider’s Revenge, the fifth book in the series, will be released on Sept. 27.

Jennifer also writes the Mythos Academy young adult urban fantasy series for Kensington. Touch of Frost, the first book in the series, was released in August. First Frost, a prequel e-story to the series, is available as a 99-cent download. Kiss of Frost, the second book, will be released Nov. 29. 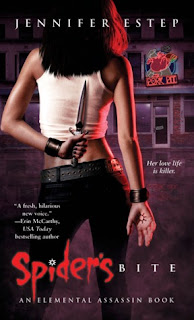 My name is Gin, and I kill people.
They call me the Spider. I'm the most feared assassin in the South — when I'm not busy at the Pork Pit cooking up the best barbecue in Ashland. As a Stone elemental, I can hear everything from the whispers of the gravel beneath my feet to the vibrations of the soaring Appalachian Mountains above me. My Ice magic also comes in handy for making the occasional knife. But I don't use my powers on the job unless I absolutely have to. Call it professional pride. Now that a ruthless Air elemental has double-crossed me and killed my handler, I'm out for revenge. And I'll exterminate anyone who gets in my way — good or bad. I may look hot, but I'm still one of the bad guys. Which is why I'm in trouble, since irresistibly rugged Detective Donovan Caine has agreed to help me. The last thing this coldhearted killer needs when I'm battling a magic more powerful than my own is a sexy distraction...especially when Donovan wants me dead just as much as the enemy. 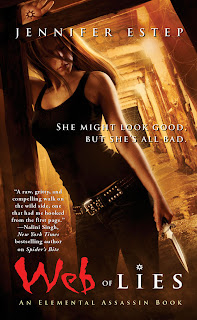 Curiosity is definitely going to get me dead one of these days. Probably real soon.

I'm Gin Blanco.
You might know me as the Spider, the most feared assassin in the South. I’m retired now, but trouble still has a way of finding me. Like the other day when two punks tried to rob my popular barbecue joint, the Pork Pit. Then there was the barrage of gunfire on the restaurant. Only, for once, those kill shots weren’t aimed at me. They were meant for Violet Fox. Ever since I agreed to help Violet and her grandfather protect their property from an evil coalmining tycoon, I’m beginning to wonder if I’m really retired. So is Detective Donovan Caine. The only honest cop in Ashland is having a real hard time reconciling his attraction to me with his Boy Scout mentality. And I can barely keep my hands off his sexy body. What can I say? I’m a Stone elemental with a little Ice magic thrown in, but my heart isn’t made of solid rock. Luckily, Gin Blanco always gets her man . . . dead or alive. 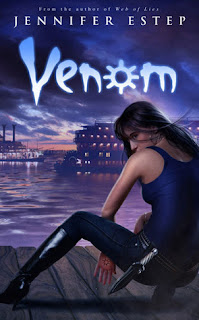 What kind of assassin works pro bono?
It’s hard to be a badass assassin when a giant is beating the crap out of you. Luckily, I never let pride get in the way of my work. My current mission is personal: annihilate Mab Monroe, the Fire elemental who murdered my family. Which means protecting my identity, even if I have to conceal my powerful Stone and Ice magic when I need it most. To the public, I’m Gin Blanco, owner of Ashland’s best barbecue joint. To my friends, I’m the Spider, retired assassin. I still do favors on the side. Like ridding a vampire friend of her oversized stalker—Mab’s right-hand goon who almost got me dead with his massive fists. At least irresistible Owen Grayson is on my side. The man knows too much about me, but I’ll take my chances. Then there’s Detective Bria Coolidge, one of Ashland’s finest. Until recently, I thought my baby sister was dead. She probably thinks the same about me. Little does she know, I’m a cold-blooded killer . . . who is about to save her life. 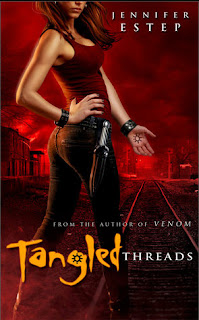 I’d rather face a dozen lethal assassins any night than deal with something as tricky, convoluted, and fragile as my feelings. But here I am. Gin Blanco, the semi-retired assassin known as the Spider. Hovering outside sexy businessman Owen Grayson’s front door like a nervous teenage girl. One thing I like about Owen: he doesn’t shy away from my past—or my present. And right now I have a bull’s-eye on my forehead. Cold-blooded Fire elemental Mab Monroe has hired one of the smartest assassins in the business to trap me. Elektra LaFleur is skilled and efficient, with deadly electrical elemental magic as potent as my own Ice and Stone powers. Which means there’s a fifty-fifty chance one of us won’t survive this battle. I intend to kill LaFleur—or die trying—because Mab wants the assassin to take out my baby sister, Detective Bria Coolidge, too. The only problem is, Bria has no idea I’m her long-lost sibling . . . or that I’m the murderer she’s been chasing through Ashland for weeks. And what Bria doesn’t know just might get us both dead. . . 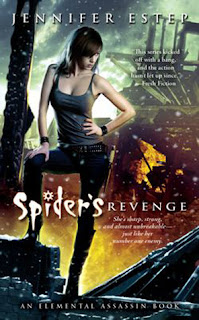 Old habits die hard for assassins.
And I plan on murdering someone before the night is through.Killing used to be my regular gig, after all. Gin Blanco, aka the Spider, assassin-for-hire. And I was very, very good at it. Now, I’m ready to make the one hit that truly matters: Mab Monroe, the dangerous Fire elemental who murdered my family when I was thirteen. Oh, I don’t think the mission will be easy, but turns out it’s a bit more problematic than expected. The bitch knows I’m coming for her. So now I’m up against the army of lethal bounty hunters Mab hired to track me down. She also put a price on my baby sister’s head. Keeping Bria safe is my first priority. Taking Mab out is a close second. Good thing I’ve got my powerful Ice and Stone magic—and my irresistible lover, Owen Grayson—to watch my back. This battle has been years in the making, and there’s a good chance I won’t survive. But if I’m going down, then Mab’s coming with me . . . no matter what I have to do to make that happen.
Posted by A Buckeye Girl Reads at 7:34 AM