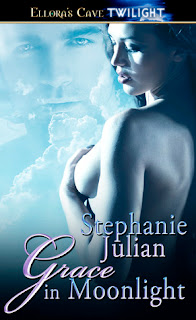 Grace in Moonlight is book number five in the Lucani series. While this does work as a standalone, I highly recommend that you read the others in the series first-esp books 3 and 4 The heroine of book five, Grace Bellasario was the villain of bk 4 when she captured the heroine of that book...however we found out it was to do tests to help find a cure for her son Alex who has a rare disease.  In the last book her son, and a few others were captured by the evil mal-shapes hifters who use their powers for evil instead of good like the lucani do. All of them escaped except for Grace's son. She'll do anything to get him back.

Kaisie Giliati is a tracker for the king and just wants to complete his mission-to get her kid and bring him back to their world. He doesn't want Grace along because he thinks she doesn't have enough experience on tracking missions to be helpful. Grace however, won't take no for an answer and see the fireworks between her and Kaisie were great. Neither backs down, and even when they start to have feelings for each other, they fight them in a big way. Normally I hate it when couples fight for almost the whole book, but in this case it worked. It just wouldn't have made sense for either of them to fall so fast for each other as they regarded each other as the enemy.


While I loved Kaisie, I had a really hard time warming up to Grace-but the fact that I ended up liking her at all after how evil she was in the last book is amazing.  One of the things I like best about this series is that even though they are all novellas, I feel like you get a really good grasp of each persons personality and what makes them work the way they do and while there are some unanswered questions, it doesn't seem to bother me as much as it does with some novellas. The heat meter in this book is pretty high~which is another thing I love about these books. There's a story to go along with the hotness!

This series just gets better and better with each installment. .   I must say I have my favorites that still haven't had their story told, and I can't wait for that. *Cough* Cat*cough* the King,*cough.*  Come back tomorrow when I have a guest post & giveaway with Stephanie Julian!