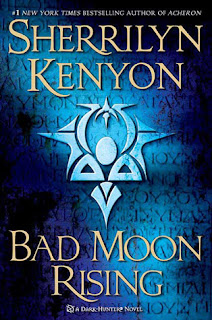 Fang Kattalakis isn't just a wolf. He is the brother of two of the most powerful members of the Omegrion: the ruling council that enforces the laws of the Were-Hunters. And when war erupts among the lycanthropes, sides must be chosen. Enemies are forced into shaky alliances.When Aimee, the woman Fang loves, is accused of betraying her people, her only hope is that Fang believes in her. Yet in order to save her, Fang must break the law of his people and the faith of his brothers. The breech could very well spell the end of both their races and change their world for ever.The war is one and time is running out. (goodreads.com)
Confession: The Dark Hunter series by Sherrilyn Kenyon is what jump started my reading craze again when I discovered Dream Hunter. It was unlike anything I had read at the time, and of course it was the last book in a series. I immediately hunted down every single Dark Hunter book and fell in love with Acheron, Simi and well, everyone. When I started reading this series there were no were hunter books or dream hunter books, just dark hunters. Now everything is combined, and these series should be read in order of their Dark Hunter number. I feel a bit guilty that it took getting a copy of the newest Dark Hunter book from a third party to review to finally take this book off my bookshelf.  I remember reading One Silent Night and being stunned by the ending and being super excited about getting my hands on the next book in the series-Bad Moon Rising.  I immediately bought it when it came out...but it lingered on my bookshelf for much too long. So long in fact, I had forgotten a lot of Dark Hunter history.

Waiting a long time to read Sherrilyn Kenyon books is never a good idea, because while each book deals with separate characters, actions in one book  almost always affect the next book out. In Bad Moon Rising I swear at least 4 stories merged into this one: Talon's, Vane's, Fury's and Zeke's-and maybe Valerious'. This book starts before Vane's (DH #5 or so) and left this reader one confused cookie. However, once I got over being confused-which took about a 100 pages, I really got into the story and loved seeing all the characters return in this book.

Bad Moon Rising centers around Aimee, a bear shape shifter, and Fang a wolf shape shifter. The two are attracted to each other right away, but it's pretty much unheard of two shape shifters from different clans, let alone species to be attracted to each other.Aimee and Fang find themselves thrown together when he gets hurt and everyone thinks he's in a coma. Aimee volunteers to watch over Fang because something keeps drawing her to him.  Events like that keep throwing them together, and what I loved is that both Fang and Aimee tried to be loyal to their families while  fighting their feelings for each other. Both of them are so stubborn and tough and independent that it takes them awhile to finally give into their feelings, but I almost didn't notice that because there was so much action going on with Daimons (enemies of almost all the species in the book) and I just love those bad guys. They are so much fun not to like.

There were a few more cheesy lines in this book then I remembered being in past Dark Hunter books, but Sherrilyn Kenyon is one of the few authors who I let this pass-probably because I have so much time invested into the characters.  One of the things I love most about these books is that why the storyline might be ongoing everyone gets their happy ending. I'd forgotten how much I love having that happen in books! Are the endings predictable? Just a tad, but I still find myself sighing contently at the end of these books and at the same time grimacing because there is always some event that leaves you hanging and needing the next book to find out what happens next. I have to say Kenyon's not afraid to take some chances with beloved characters.

Bad Moon Rising was like returning to old friends, and this is one series that I don't think I'll ever tire of...and I can't wait for Simi and Savitar to get their books.