ARC Review of Second Grave on the Left by Darynda Jones 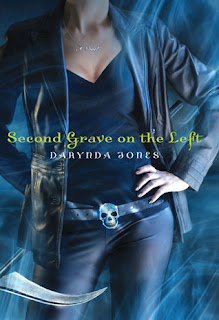 When Charley is rudely awakened in the middle of the night by her best friend who tells her to get dressed quickly and tosses clothes out of the closet at her, she can’t help but wonder what Cookie’s up to. Leather scrunch boots with a floral miniskirt? Together? Seriously? Cookie explains that a friend of hers named Mimi disappeared five days earlier and that she just got a text from her setting up a meet at a coffee shop downtown. They show up at the coffee shop, but no Mimi. But Charley finds a message on the bathroom wall. Mimi left a clue, a woman’s name. Mimi’s husband explains that his wife had been acting strange since she found out an old friend of hers from high school had been found murdered a couple weeks prior. The same woman Mimi had named in her message. Meanwhile, Reyes Alexander Farrow (otherwise known as the Son of Satan. Yes. Literally) has left his corporeal body and is haunting Charley. He’s left his body because he’s being tortured by demons who want to lure Charley closer. But Reyes can’t let that happen. Because if the demons get to Charley, they’ll have a portal to heaven. And if they have a portal to heaven…well, let’s just say it wouldn’t be pretty. Can Charley handle hot nights with Reyes and even hotter days tracking down a missing woman? Will Cookie ever get a true fashion sense? And is there enough coffee and chocolate in the world to fuel them as they do? (goodreads.com)

Warning-Gush fest ahead.  To put it simply I loved this book. This is one of my new favorite Urban Fantasy series. It has the perfect combination of a spunky heroine, mysterious and sexy hero, and secondary characters that will leave you laughing and loving them almost as much as the main characters. This is one of the few books that I had to have the advanced copy of. I wrote the publisher asking if I could pleasssssssse have a copy of that and was so surprised when they said yes. When the book came I wanted to start it right away, but knew I wouldn't be able to stop reading it so I waited until my day off came and literally had it read in hours.

I loved this book to pieces. There is so much going on that you don't have time to get bored. I found myself reading it a bit slower because I wasn't ready for it to end. Second Grave on the Left has everything you could ask for: a spunky heroine, witty best friend, ghosts, multiple mysteries to be solved, and most important of all: a tortured hero.

Charley is a kick ass heroine  She's full of grit and determination. I may not have agreed with all of her actions, but could totally see where she was coming from in doing them, if that makes sense.  There is so much I could say at the mysteries she's trying to solve-mainly that of Reyes and how to help him stop the demons from coming to earth, but I don't want to accidentally spoil something..so I'm just going to talk about the mysterious and sexy Reyes  He is just so sigh worthy. .He and Charley aren't actually together in person, but the chemistry between them is undeniable.  I  wanted more and more of  him....which is saying a lot because the book doesn't revolve around romance-but it gives you enough to give you a tingly feeling about Reyes.

The secondary characters in this book are just as great as Charley and Reyes are. Her best friend Cookie had me in stitches, and the mystery that she gets Charley into was really interesting. I like how there is always more then one storyline going on, but everything flows nicely together and brings all the characters together. Garrett the skip tracer who helped Charley out a lot in book also returns. I felt a bit sorry for him because while I loved him in book one, Reyes just took over the book for me. He tries (and fails) so hard to keep Charley safe, but everything always backfires on him somehow.   Aside from Cookie and Garret  there are the ghosts from book one that return, and each one is great in their own way. Charley's family is also around and at the the end of the book I just wanted to hug her sister, and slap her stepmother and father silly. I won't say more because I don't want to give anything away (I know I say that a lot, but it's just one of those books) -but my feelings about her family were much different in this book then they were in book one.

I could just go on forever about my love affair with this book, but as I mentioned earlier, it's hard to go into details and not give everything away, so I'll just say this is one series you don't want to miss. Here is my review of the first book First Grave on the Right

After reading the book, I was left with so many questions. The ones that stick out to me are:

~Who was leaving Charley that note in her kitchen?
~Who is Miss Marigold?
~Why does Owen hate her so much?