Review: Silent in the Grave by Deanna Raybourn 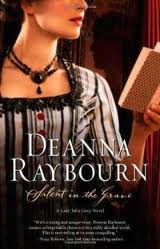 Prepared to accept that Edward's death was due to a long-standing physical infirmity, Julia is outraged when Brisbane visits and suggests that Sir Edward has been murdered. It is a reaction she comes to regret when she discovers the damning paper for herself, and realizes the truth.Determined to bring her husband's murderer to justice, Julia engages the enigmatic Brisbane to help her investigate Edward's demise. Dismissing his warnings that the investigation will be difficult, if not impossible, Julia presses forward, following a trail of clues that lead her to even more unpleasant truths, and ever closer to a killer who waits expectantly for her arrival. "LET THE WICKED BE ASHAMED, AMD LET THEM BE SILENT IN THE GRAVE." These ominous words, slashed from the pages of a book of Psalms, are the last threat that the darling of London society, Sir Edward Grey, receives from his killer. Before he can show them to Nicholas Brisbane, the private inquiry agent he has retained for his protection, Sir Edward collapses and dies at his London home, in the presence of his wife, Julia, and a roomful of dinner guests. (goodreads.com)

I'm not sure why, but lately I've been on a mystery kick. For Christmas this year I got three of the books in this series, and when I sat down to read book two, I realized that for whatever reason I didn't have book one. Luckily for me, my library had it! I'm so glad I started with this one instead of jumping into book two,  because a lot goes on in this fun historical mystery! Some would call this a historical romance/mystery, but I found there to be just a hint of romance in it so I don't think it really qualifies as a historical romance, but the hint of romance was perfect for me and didn't take away from the mystery at hand.

When Lady Julia's husband dies at a dinner party she's giving she meets Nicholas Brisbane.  He tells her that her husband hired him because someone was out to kill him. Lady Julia doesn't believe him and even though she seems him at the funeral, forgets about him until months later when she finds a weird letter in her husbands desk. Lady Julia realizes that maybe, just maybe Nicholas might be right. However, a year has past and Nicholas thinks that the trail has already run cold and promises to look into it, but tells her it might be too late. After waiting for him to get going, Lady Julia thinks he is moving to slow and starts to investigate on her own..which ends up getting her into trouble and Nicholas helps out.

While I thought at times the book moved a bit slow, I really liked Lady Julia and all of her brothers and sisters. By the time the book was over I felt like I was a member of the family. I loved how they all interfered with Julia's life and thought that she should be more involved with Nicholas then what she was ready for. They were just ready for her to be happy, because the marriage she had with her husband, while not arranged wasn't the happy one she thought it would be. I loved how when Julia realized that she wouldn't really be accepted back into society because she was a young widow with money and considered competition in the marriage market, she accepted it and decided to do things her own way, even if it wasn't exactly proper. The battle of wills she had with herself was great, and made her actions more believable then they would have been otherwise. I confess I found out who the murderer was early in the book because while flipping to the end of the book to see how many pages the book had I stumbled across the paragraph that revealed who it was. Even without doing that, I think I still would've been able to figure out, but I still enjoyed all the twists and turns that it took Lady Julia to finally figure out who killed her husband.

This was a much faster read then I thought it would be, and I had this read in one day. I couldn't put it down. I can't wait to read the rest of this series and watch the relationship with her and the mysterious Nicholas Brisbane continue. Silent In The Grave was just the right mix of mystery and romance, leaning more on the mystery side.
Posted by A Buckeye Girl Reads at 7:17 AM