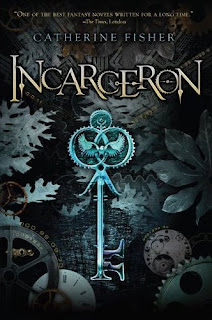 Confession: The only reason I picked up this book was because I read that they were going to make a movie based on this book and it was staring Taylor Lautner.  I'm one of those people who loves reading a book before the movie comes out so I can see how horribly Hollywood has messed up the book. I'm weird that way.

Incarceron is set in the future, and is one of those books that you don't soon forget. It's about a prison that started out as a social experiment and was supposed to be paradise. It's where a society sent their prisoners, poor and a few scholars who volunteered to be apart of the project. The prison soon grew out of control and became a living thing. Paradise didn't last long, and people soon began doing awful things just to survive in it. Incarceron was supposed to be controlled by the Warden, and each warden in charge was the only person who knew where it was located and how to supposedly control it. The current wardens daughter, Claudia is set to be married to a guy she wants nothing to do with, but because of political reasons can't get out of the arranged marriage. In her world, they live in what's known as an era-everything and everyone looks and acts as they did in a certain part of the past~the year is never said, but I imagined it to be a regency era time period.


Claudia is bored and curious about her fathers office. Why is it always locked? Why is he in there for days at a time without leaving? One day she braves his anger (he's not the best father in the world) and breaks into his office. She finds a key and discovers that she can communicate with someone else...that someone else is Finn, who is a prisoner in Incarceron and has found a similar key.  Finn believes that there is a world outside of Incarceron, and his friends think he's crazy. He just wants to get out and leave the prison behind. Even though only one of friends believe him, the others work with him to find a way out because they aren't exactly happy in the prison. Claudia discovers that the prison isn't the paradise it's suppose to be and works with Finn to try to help him out.


The adventures that Finn and Claudia have are just amazing...the pov switches from Claudia to Finn, and is a little confusing in the beginning, but once you get used to the switching povs, the story just flows and you become apart of Incaraceron. Claudia's father is great as the evil warden, and he just made me shudder. Her fiancee is horrid as well, and I really began feeling sorry for her because anyone could see that they weren't a good fit.

There is so much going and you're never quite sure who is telling the truth or not or who to believe. I loved how the prison is always changing, and you never know what will pop up next to try to stop Finn and his friends. This is one of those books that is just impossible to describe how great it is without giving everything away. I think this could be a great movie, but honestly it should be interesting to see how Taylor Lautner does as Finn, because I couldn't picture him as that character at all. This was such a great book because of all the layers that are thrown into and how interesting all the characters were. I can't wait to read book two in the series, Sapphique.

Posted by A Buckeye Girl Reads at 8:11 AM