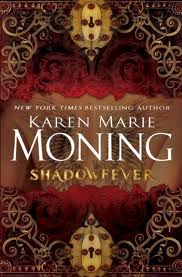 
Confession: I never really understood why Karen Marie Monings fans were called Moning Maniacs until I began the wait for Shadowfever to be released. It totally turned me into a maniac and I then I got how the name came to be. These books turn you into a little bit of a maniac.

This book was just amazing. I can't remember the last time a book totally swept me away like this one did. I cursed, cried, laughed, sighed and then did them all over again. This was just one intense read. I don't want to spoil anything for those who haven't read it, but I'll just say this: Pretty much all the questions we had throughout the series are answered in this book. There are a few left open-but I think that's because they'll be answered in the spin off series from this one that is being planned. I soo can't wait for those books to come out!

It's no secret that I'm a huge Barrons fan-even though he is a bit of a jerk, I still love him. I just can't help it. I know-I have book boyfriend issues. I never fall for the nice guy heroes. (The exception to the rule is Martini from Touched By Alien/Alien Tango books by Gini Koch.) I think something must be wrong with me because the jerkier Barrons is the more I love him. I liked how we got to know more about him and his men-not a whole lot more, but just enough to satisfy me.

Now, there are actually  more characters in Shadowfever and the series then just Barrons, and I love how no character is forgotten. Each one, no matter how small has a meaning.  I found myself saying "holy crap!" a lot at each new discovery with characters who didn't play a huge role in the book, but played a role with the how everything turned out-if that makes sense. I've learned one important thing from reading this series-there are no minor characters! There were also a few minor characters who I learned to love even more in this book, and I loved how her highlanders made an impact. It's like it was an homage to her fans for being such loyal readers.

The only teeny tiny problem I had with this book (and the other Fever books as well) was that no matter how many times it was mentioned that Mac was from the Deep South with all of its sunshine, I could not for the life of me picture Mac talking with a Southern Accent. I just kept picturing her speaking with a northern accent. I think it's because when Mac talks there aren't any Y'alls or southern drawls in her speech.

All in all, I thought this was a good conclusion to the series and can't remember the last time so many bombs were dropped in one book-a few of which I should have seen coming and didn't. I have to give a big shout out to Smexybooks, Fiction Vixen and Smokinhotbooks because without them and twitter I never would have discovered this series, and I would not be a Moning Maniac, and that would just be sad. I have to give a shout out to Bells from Hanging With Bells and Tasha from Truth, Beauty, Freedom and Books both whom listened to my crazy Barrons theories and made waiting for this book so much fun!!

Shadowfever is just one of those books that is impossible to describe and put into words. It's not for everyone, but I think that Karen Marie Moning definitely saved the best for last!

Thanks to TLC Book tours, I have one copy of Shadowfever to give away. The giveaway is open to US Residents only-(Sorry) and you must be a blog follower to win. Please state in the comments if you'd like to be entered in the giveaway and leave an email address so I can contact the winner.  The giveaway is open until  10:00pm January 31st, 2011. If I do not hear from the winner within two days of contacting them, I will unfortunately have to pick a new one.

Edited to add: I can't believe I forgot my meters!!  Here they are:

Other stops on the tour: