Sharks in Venice: Movie Review for the Venice Reading Challenge 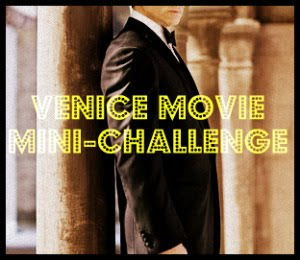 I haven't been doing so well on the Venice Reading Challenge hosted by the wonderful Tasha over at Truth, Beauty, Freedom & Books.  However, when I saw that she was hosting a movie mini challenge (watch 2 movies set in Venice) I knew I had the perfect movie: Sharks in Venice, Starring Stephen Baldwin.  This masterpiece was on the SyFy channel a few weeks back, and I swear I don't know why I torture myself with the Saturday action movies on that channel. Oh wait, it's because I have a weakness for cheesy movies, and they don't get much cheesier then this movie. :)
Stephen Baldwin plays a archaeologist professor (yes, you read that right) who travels to Venice to find out more about how his father, a famous archaeologist and diver died while diving on a dig.  I'm not sure how the SyFy Chanel did it, but they found actors who made it seem like Stephen Baldwin could actually act. Who knew that was possible? He was actually semi believable as a professor, but it took me half the movie to stop laughing at the fact that he was in fact playing a professor. When I finally stopped laughing over his being a professor, he discovers that there are sharks in Venice-which of course gets him laughed right out of the police station.

As he gets laughed out of the police station there is a group of people who think he's getting to close to the truth of how his father died: The mob. Yes, that's right-the mob-I mean, what's a movie set in Italy without the mob, right?  It turns out his father got his dig financed by them, and they aren't too happy with Stephen investigating all over Venice and kidnap his girlfriend. To get her back, he has to find the treasure that his dad was looking for.  Getting his girlfriend back means that we get to see lots of scenes with sharks attacking random people on the streets of Venice, and them going after Stephen. When the first shark came out of the water, I thought I was going to die laughing. The special effects were like those in Twilight: bad.  As I stopped laughing, I realized that the shark had bitten poor Stephens leg, so he was bleeding all over the place and was having trouble hiding from the sharks because of it.

In his attempt to escape from the sharks  he stumbles upon the secret that his father found, and is what got him killed in the first place: ancient treasure hidden by the church.   He also manages to rescue his girlfriend, find out why there are sharks in Venice-they were set there by the evil mob to protect the treasure, and also manages to win the respect of the Venice Police Department. Or at least I think that's what happened-I was really too busy laughing at the sharks in the canals to pay  a lot of attention to the actual action going on  in the movie.

This movie was so cheesy that it was fun to watch. The next time it's on the SyFy channel, it's one you have to watch-just for the LOLZ.  I almost forgot-it was filmed on location, and the shots of Venice practically save the movie.

For your entertainment, the trailer for this epic movie. Let me know if you can't see it.

Posted by A Buckeye Girl Reads at 3:58 AM