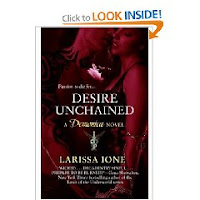 Desire Unchained by Larissa Ione is the second book in the Demonica Series, after Pleasure Unbound. I was going to wait until I finished the third book in the series to review this one, but since I seem to be reading slower then molasses these days, I thought I had better write the review before I forgot what the story was about!
The Plot:
Runa Wagner is out for revenge. A year ago she was running her quiet coffee shop and living a nice, boring life. Then she met Shade and took a risk to be with him on a dare from a co-worker who said she was in danger of becoming boring and predictable. Neither of them expected the passion that came from that night or relationship. Runa was shocked when she was betrayed by Shade-even more shocked on what she encountered on the way home from the night she was betrayed. She was changed that night in more ways then one. Shade is a Seminus Demon and is one of Eidolons younger brothers who we met in book one. He's stuck with a love curse that makes it impossible to get serious about someone.

In book one we learned that someone was harvesting demon body parts and selling them on the black market, but no one knew who or what was behind them. This book continues that storyline. Runa and Shade are reunited when they are captured by the people who are demon harvesting. Things don't look so hot for either one of them, because word has it that it is impossible to escape once you are captured. Runa and Shade work together to become free, and the feelings they have are tested time and time again. Once they are free they combine forces with Shade's brothers Eidolon and Wraith to take down the demon harvesters and along the way try to figure out how to break Shades curse while falling deeper in love with each other.
So much more happens in this book, but I don't want to give anything more away!
My thoughts:
Larissa Ione is a master story teller and has quickly become one of my favorite authors. She manages to write erotica with actually having a plot-which so few authors seem to do in this genre.  There is a little BDSM in this book, but not so much that it takes over everything this. If you are like me and haven't read a lot of books with BDSM in the storyline, this is a good book to start with. I loved that Runa was a strong, independent character while still being likable. So many strong female leads just aren't likable until the very end of the story, and by then it's too late.The side characters are as likable as the main characters, and grow with each book. I find myself look forward to the side love stories almost as much as the main one in this series. The only downside of this book was that Tayla, the heroine of book one was hardly mentioned at all in this one, but I guess that makes sense as the focus is on the brothers & like the first one, the ending just happened so fast and everything just seemed to come together a little too easily.