Feel The Heat by Cindy Gerard 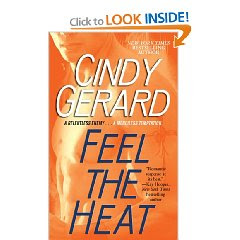 Feel the Heat by Cindy Gerard isn't a book I would normally read. Why do I avoid books like this one you ask? Well, it's silly but this genre keeps stealing away my historical romance authors so I've held a grudge against it for awhile now.  However when I saw the hero of this book-Raphael Mendoza featured in one of Leontine's hunks on her Beefcake Preview Club Night , I knew this was a book I had to read! Imagine my surprise when I actually won this book~It was like fate was telling me that it was time for me to end my silly & childish boycott of this genre.


Feel The Heat is the fourth book in Cindy Gerard's Black Ops Inc. series. It tells the story of Raphael Mendoza and B.J. Chase.As a new reader to the series I loved how past storylines didn't overtake the current stories. I also thought she did a great job of setting up romances for future books without them getting in the way of the storyline at hand. I've read so many series where authors seem to forget about the romance at hand while they focus on other things going on  in the series they are writing about.
The Plot:
B.J. Chase is a tough as nails Defense Intelligence Office who gets assigned to track down a national security breach and find out who was responsible for it. However, when a major player in the US government gets killed, and thus putting a friend of the Black Ops Team in danger, thus making them involved in the investigation. B.J. is given the task of working with the team to track down the person involved in the security breach-and she isn't too happy about it.  Raphael "Choirboy" Mendoza knew his past would catch up to him-but he never knew it would involve trying to stop a weapons system known as an E-Bomb from going off. He and BJ go undercover to try solve the mystery of who is behind the bomb and the security breach. While they are undercover their attraction to each other becomes impossible to stop. Will they be able to break the walls they built up to keep people out in order to find love?

My Thoughts:
In the beginning of the book I had a really hard time liking B.J. I thought that she was just too tough and unlikable & had a hard time relating to Raphael.  However, as the story gets going and the heat meter rises both become more likable and I felt myself cheering them on to finish the mission. It's been such a long time since I read a book like this that I had forgotten how much fun books these action-romance books can be. My only pet peeve was that the author kept calling the group BOI's, and it took me forever to figure out that it stood for Black Ops Inc guys. I'm a bit dense sometimes...but all in all this was a quick, fun read & I can't wait to go back and read the first three in the series.